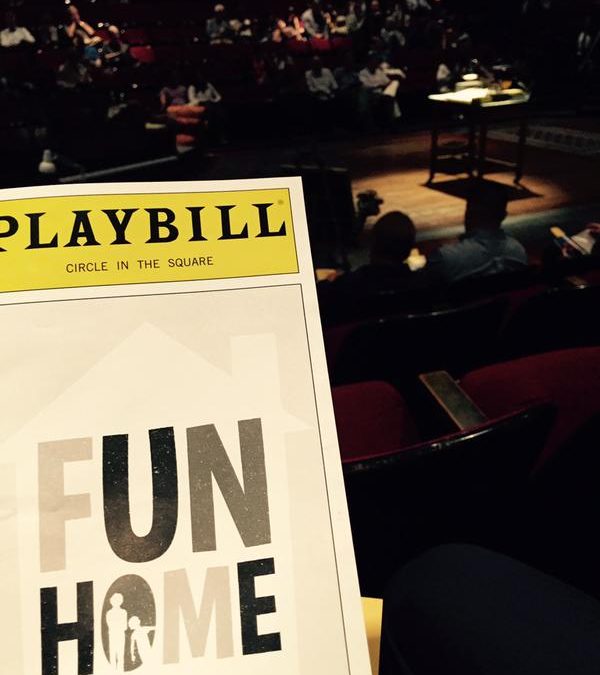 This past weekend, my lovely in-laws came to visit us in NYC, and the four of us went to see Fun Home on Friday night. In case you haven’t heard of it, the play recently picked up the Tony Award winner for Best Musical and has been getting rave reviews.

It’s also been the subject of a lot of controversy lately. The play is based on the graphic memoir by Alison Bechdel. You may have heard about the Duke students refusing to read the required book assignment because of its gay theme and nudity.

The university’s vice president for public affairs and government relations Michael J. Schoenfeld said in a statement that Fun Home was chosen because of its controversial, conversation-starting subject matter. (It looks like they certainly accomplished their goal.)

I haven’t read the memoir, but I can say this about the play: it was thought-provoking, emotional, and overall entertaining. What I loved most was that there were so many different themes, but it felt like nothing was really forced.

As the four of us talked about it afterwards, we realized that each of us took away something different from it. The play simply presented a story and let each individual audience member decide what they wanted to do with that. Oh, and there was no nudity in case you were wondering….

My favorite part about the show was the music. It’s amazing how they were able to so tastefully make this serious, emotional story into a play with bubbly acts and catchy tunes. “I couldn’t imagine anyone breaking into song,” Alison said about the play when she first heard that they were turning her memoir into a musical. “But then I learned that musicals are always about life and death situations.”

You can sneak a peek at one of the more upbeat numbers below — the clip is from a live performance on The View, so skip to 1:40 to see them singing and dancing (also, can we just talk about how adorable and talented those kids are?)


If you haven’t had a chance to see this in NYC yet and are interested in getting tickets, click here!