The idea was to create a Chopped or Cutthroat Kitchen type of cooking challenge where we’d give the boys certain ingredients and a time limit to cook a fun dish, but it ultimately just turned into an amazing double date with two main courses and a lot of wine… 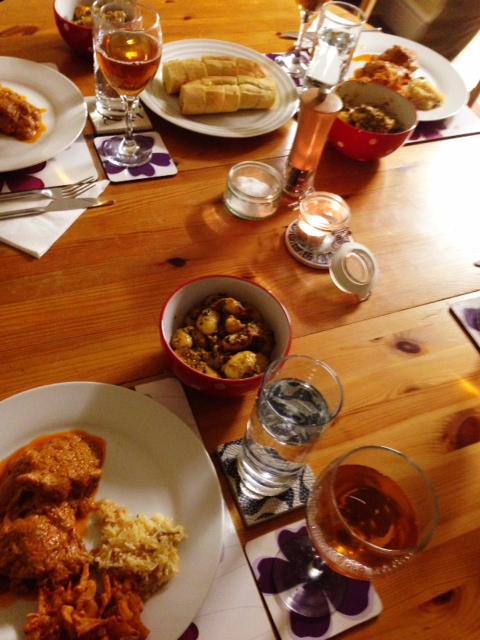 On Saturday, Christopher and I had a dinner party with our next door neighbors Greg and Aleks. I’ve been hearing how Greg is a master in the kitchen, and I am obviously a pretty big fan of C’s cooking, so Aleks and I thought it’d be fun to have the guys go head-to-head in a cook-off, but there’s a reason we’re not producers for the Food Network. It just turned into a make-what-you-want main with no time limit kind of night, and really, it was perfect!

Christopher made his signature dish gnocchi with sundried tomato pesto while Greg wowed us with a homemade Indian-style butter chicken. OMG. They were both so delicious. Although, the guys didn’t really understand our instructions on making it a tasting-sized portion, so everyone was more than stuffed at the end of the night.

After dinner, we played Perudo — it’s like a dice version of the card game BS, but this one has so much more math involved! I still have no idea how I won the first round. Honestly, I still really don’t know how to play.

We ended the night with a few scoops of ice cream (as if we weren’t already so full) and parted ways, doing the long commute all the way across the hall.

When Christopher and I first moved to Oxford, I was terrified we weren’t going to have nights like this. Making new friends is so hard to do from scratch, especially at this age (so jealous of those 5-year-olds who can compliment another girl on her bow and become best friends for life–if only it were that easy!) I feel like this year is going to be full of adventures but I think it’s nights like this that we’re going to cherish the most.

Have you ever lived abroad? Do you still keep in touch with the friends you made?