Monday was our first official bank holiday in the UK, so we took full advantage of the long weekend by jetting off to Edinburgh, Scotland. All of the locals we chatted with said they’ve had a horrible summer — it basically rained every day in August, that is, until we came (yay!) The weather couldn’t have been any more perfect than it was while we were there, besides the one downpour we got caught in on Saturday night (but the fireworks, which happen every night, still went on). 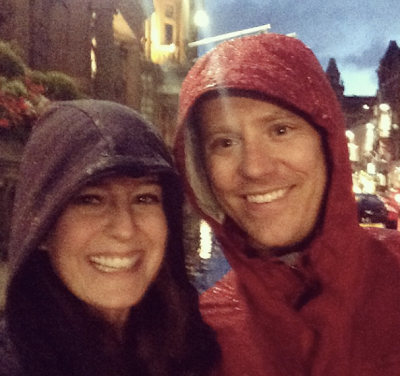 As I mentioned last week, the world’s largest arts festival called The Fringe was happening, so we took in a few free comedy shows on Saturday and Sunday night. The first night, we crowded into a room the size of a closet with about 100 other people (it had fire hazard written all over it!) and listened to an American girl share her experience living in London (more on that later this week — it deserves its own post!) The next night we marched into a larger room, equally as crowded, and saw four comics do standup. Two were hilarious, one was so-so, and one was downright awful. But I guess that’s the chance you take when going to a free* show. (*Free as in you donate money at the end…)

Speaking of “free*” we did a two and a half hour walking tour with Sandemans (which we’ve used in both Oxford and London) and learned the history of Edinburgh. From stories of the Stone of Destiny (click on the link to read about it–it’s quite fascinating) to the public square where they nailed criminals’ ears to the wall (I’m still sick over that one), there were lots of little tidbits we probably would have missed if we walked around ourselves.

After the tour, we went to a pub called Maggie Dickson’s. The Scots tend to name their pubs after someone in history so they can keep their story alive. Maggie was hanged in 1724 because she concealed her pregnancy so that she would not lose her job and gave birth in secret only to have the baby born dead. She was sentenced to death and after her public hanging, she was transported away to be buried but the driver heard noises coming from the coffin. It was Maggie! She was alive! Since she already had died once, she was granted a pardon and lived for another 25 years! And I had nachos at her pub 🙂

We also toured Edinburgh Castle, a huge historic fortress that sits above the city atop an extinct volcano. It’s absolutely massive! My favorite parts were seeing where the prisoners slept (so Orange is the New Black…) and doing a whiskey tasting at the gift shop (because when in Scotland…)

On Sunday, we conquered Arthur’s Seat, an 823 ft hill. The views were incredible!

On Monday, we popped into the new Parliament building, which had an early estimate of £40 million to build, but ended up costing a whopping £400 million! The modern architecture was designed to make it look like the building was growing out of the ground. It’s quite an ugly building from the outside, but seeing the inside through a tour, it grew on us.

We had such an amazing time on our first real vacation within Europe this year. Looking forward to many more! Is there any place we should add to our list? Would love to hear your suggestions in the comments below!

PS- I hate bagpipes, but I took this video for you. Enjoy!